As we come upon graduation season, it’s a wonderful time to equip recent graduates with resources to effectively manage their own personal finances. The lack of financial literacy never ceases to amaze me as I hear from parents on a regular basis asking for something they could provide to their son or daughter to help them transition to becoming financially independent adults.

Instead of throwing up your hands, there are a number of things you can do to get someone off to a good start managing their money. The first step is to overcome the excuses of why they can’t do this themselves. Too often I hear people say they don’t know where to begin so they never get started. Blame it on the lack of financial literacy in our education system or parents who never instilled smart financial habits. Either way, blaming isn’t going to get the job done.

Once you’ve accepted responsibility, the next step is to identify resources or people who can help. Some families have someone who’s done well managing their money. It might be worthwhile spending some time asking them how they do it. If you work with a financial advisor, they might have some ideas too.

I’m a big believer in self-development and educating yourself, especially when it comes to your own money. A quick search for personal finance books literally results in thousands of titles. The overwhelming amount of information is another roadblock to getting started. 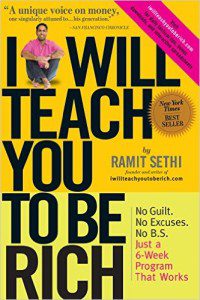 sake of simplicity, there’s one book I’d recommend to any person in their 20s or early 30s written by Ramit Sethi called “I Will Teach You to be Rich.” While I was initially put off by the title, the content is well organized and practical. The book came out a few years ago yet I find the information just as relevant today (which is a sign of a good book!).

Sethi organizes the chapters into a six week program to educate his readers on how to take control and achieve financial success most people only dream about. It’s not some get rich quick scheme or a manual on stock picking (which both Sethi and I agree is a waste of time). Rather, it’s based on conscious spending (i.e. living within your means) and a gradual accumulation of wealth through automatic savings.

He’s pragmatic in recognizing that for many people, paying off credit card debt is a top priority so he addresses reducing debt as the first step. From there he gives specific guidance around setting up bank accounts and prioritizing your savings (such as capturing the company match to any retirement savings plans).