Where’s the money? as published in the Racine Journal Times | Sept 9, 2018

Have you ever wondered what happens to your money when you open a brokerage account to buy individual stocks (at a place like TD Ameritrade or Charles Schwab) or buy shares of a mutual fund which are collections of individual stocks or bonds (like Fidelity or Vanguard)? It’s been almost 10 years since Bernie Madoff’s $65 billion fraud scheme was exposed, but it’s a good reminder to continue to be vigilant about where the money in your investment accounts is actually held. 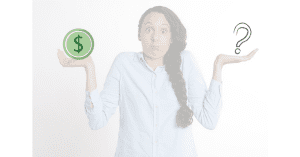 When you write a check to invest, what happens next depends on what you’re buying. The shares of individual stocks are not actually held by brokers but rather through a third-party bank or trust company. The brokerage firm provides reports to you and processes the trades which then gets reported to the third-party trust or clearing company which consolidates the trades and updates the ownership records. This third party is ultimately where the stock is held.

By law, mutual fund companies are required to use a qualified custodian to hold their underlying stocks with regular independent audits. Even if a mutual fund ceased operating, the fund owners’ money is still held by the third party until they are distributed.

This system of using third parties started around 50 years ago to replace the cumbersome process of physically transporting paper stock certificates between owners. Holding the actual certificates in central locations and just changing the ownership records increased the efficiency and subsequently reduced the cost to own stocks.

For those wondering how Madoff was able to get away with his fraud for so long, he didn’t create mutual funds, so he didn’t have to follow the same rules, and no one bothered to check whether the stocks he said he owned were actually being held by a third party.

You can protect yourself by following a couple of simple guidelines. First, make sure you know who’s on the receiving end of any checks you write to be invested.

If you don’t recognize where your check is going, confirm the receiving company is registered.

You can look up specific advisors or companies to see if they’re registered at brokercheck.finra.org.

I also recommend asking your advisor where your investments will be held and whether you’ll receive statements directly from the company. If the advisor is the only one sending statements, this is a red flag that something could be amiss.

Finally, any brokerage firm you work with should be covered by the Securities Investor Protection Corp., which provides an additional layer of insurance protection in case a brokerage firm fails.

Following the trail of money is not always an easy process (as it often requires reading those lengthy prospectuses you receive in the mail) but it’s an important consumer safety step to follow.