Understanding inflation, recession, and the Fed

The June CPI number came in at 9.1% marking two months of consecutive increase and it was a whopper.  Two months of CPI increase used to indicate that we were in a recession, but the definition seems to be evolving under an Administration who is reluctant to label our current circumstance.  It’s some relief that the July CPI came in unchanged, but we are still feeling the pinch with everything from gas to groceries. 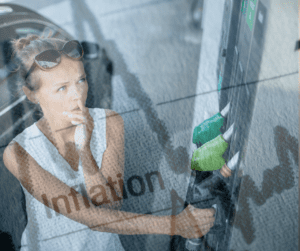 The Fed raising rates so quickly, and by so much, will not only cause havoc in the bond and the equity markets, it will increase the widespread assumption of many market participants, economists, and pretty much everyone else that if we aren’t already in a recession, however it’s defined at present, we will be at some point in the near future.

Both inflation and recessions are susceptible to sentiment. Specifically, when consumers think inflation will increase, it very often does. Fed Chairman Jerome Powell alluded to this relationship in his comments after the FOMC meeting in June, and the notes to the meeting made it clearer. The Fed didn’t just look at the inflation number (the Fed prefers PCE inflation to CPI, but PCE went up as well). It also looked at the University of Michigan Consumer Expectations data on inflation, which showed an increase.

Recession expectations work the same way. It becomes apparent first in the equity and bond markets, which price into assets today where the markets expect prices to be in the future. This is why equity markets tend to decline before a recession. When consumers and corporations begin to fear recession and then make substantive changes to spending behavior, the retrenchment has ripple effects across the economy and leads to more economic cooling than would be indicated by the monetary policy moves the Fed is making.

This is the problem with the Fed using past-tense data to fix a future-tense problem. The Fed’s moves to slow the economy have an impact beyond tightening the availability of money. It’s challenging to know when and how much to raise rates because factoring in the future behavior of all the actors is impossible.

The challenge for the Fed is to decrease money available for investment for corporations and consumers and communicate its serious intentions to continue doing this until it hurts. But not so much that everyone loses hope and refuses to participate. Kind of like some aspects of parenting. Or training a cocker spaniel.

So Are We Headed for (or in) A Recession?

There are a few things fueling the conversation.

The strength of the labor markets. Fed Chairman Powell has called the labor market “unsustainably hot.”  This is both underpinning the economy and a rationale for raising rates. The Fed has indicated that a continued strong labor market may mean that aggressive rate increases will not increase the risk of recession. The U.S. Bureau of Labor Statistics reported total nonfarm payroll employment rose by 372,000 in June, and the unemployment rate remained at 3.6 percent.

Consumer spending. Money talks, right? Well, consumers are still gabbing away. Retail sales rebounded in June, increasing 1%, as reported by the Commerce Department. Even accounting for spending on gas and cars, which are seeing huge price increases, retail sales rose 0.7%. Gas prices are coming down over the past month, but they are still too high and impacting the cost of just about everything.

Consumer Sentiment. Michigan football may no longer capture attention, but the University of Michigan Consumer Sentiment Index sure is. The preliminary reading for July ticked up slightly off the historical low point of 50 that it hit in June.

Gross Domestic Product. We won’t have an official estimate of GDP until the end of the month, but the Atlanta Fed has created a model of GDP that attempts to forecast the key economic indicator, removing the lag of the official measure from the Bureau of Economic Analysis. The GDPNow model estimate for real GDP growth (seasonally adjusted annual rate) in the third quarter of 2022 is 1.8 percent as of August 16.

Are we in a recession? The National Bureau of Business Economics (NBER) is the accepted authority on a recession. The historical standard definition of a recession is two consecutive quarters of a contraction in the economy. That was modified in July to now read “a significant decline in economic activity that is spread across the economy and that lasts more than a few months.” If the official estimate of GDP comes in negative, the economy would fit that description. But those aren’t the only factors NBER uses to determine when a recession starts.

For investors, whether we technically enter a recession or not may be beside the point. The shortest recession on record was in 2020 and lasted two months at the beginning of the pandemic. Even if the economy is headed into a recession, given the other positives, we can only hope it is not deep or longstanding.

This work is powered by Advisor I/O under the Terms of Service and may be a derivative of the original. The information contained herein is intended to be used for educational purposes only and is not exhaustive. Diversification and/or any strategy that may be discussed does not guarantee against investment losses but are intended to help manage risk and return. If applicable, historical discussions and/or opinions are not predictive of future events. The content is presented in good faith and has been drawn from sources believed to be reliable. The content is not intended to be legal, tax or financial advice. Please consult a legal, tax or financial professional for information specific to your individual situation.

Our Most Recent Posts
Go to Top